Medications and other medical supplements

The effects of medications and other medical supplements and their proper intent of use, benefits and restrictions, must be presented to anyone who may be thinking about using them. A person thinking about this kind of treatment must be very patient and disciplined. Results require months, sometimes even years of constant therapy, which the doctor will prescribe. There is still no magic pill that will lead to instant hear growth over night, but there are a couple of methods that can stimulate and improve the appearance of hair.

The first medication in the cure of hair lose was chosen by the American Drug Agency (FDA). Minoxidil in the form of a lotion (Rogaine). Before it became available in the form of a solution, Minoxidil was used as a drug to lower blood pressure. Doctors noticed that patients using this drug had an increased rate of hair growth on the whole body. It is still not fully understood in what manner Minoxidil acts on hair growth. This medication is a vasodilator (dilates blood vessels) and it is possible that it increases the amount of blood flow towards hair follicles. It extends the period of time in which hair grows (anagen phase) and improves the quality of hair by increasing the volume and length of thin hairs.

Minoxidil acts on areas that are not completely without hair. Equally acts on both the crown and the hairline. The greatest benefits of using Minoxidil are seen in between six months and two years of use. If the lotion is properly used and in appropriate concentrations the effect can be prolonged to four years. After this period of maximal action, the drug begins to lose its effect, hair loss persists but in a smaller quantity than before.

On the market exist two concentrations of this medication – 2% and 5%Minoxidil. Treatment starts with a 2% solution twice daily for one month and then once a day for 2 years. After that period we move to a higher concentration. To increase the absorption of the drug we can apply 0.01% Tretinoin cream with Minoxidil or use mesotherapy which is to inject the madication intradermally.

The main side effects of this drug are local irritation, stinging and a feeling of greasy hair. Rogaine also existing in a foam form with which these side effects are decreased. Females may experience the growth of hair on their face, but some systemic side effects such as low blood pressure, headaches and vertigo are rare. Women planning pregnancy, who are pregnant or nursing should not take minoxidil due to its high potency to cause congenital side effects in the newborn baby.

After 6 months of applying Minoxidil and shampoo for hair loss 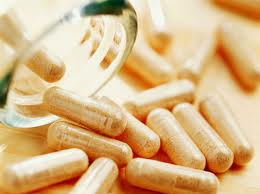 The only pill that gives significant results in the treatment of hair loss is called Finasteride, in the world commonly known as Propecia. The essence of its action is in blocking the enzyme 5 alfa reductase which decreases the hormone dihydrotestosterone (DHT) that leads to hair loss.

The action of this drug named Proscar was discovered 20 years ago when doctors start to noticed that men using this drug in the therapy of enlarged prostate, noticed new hair growing. Different doses of Finasteride were tested and it is shown that the safest and most effective dose of this medication, which has been approved by FDA, is 1mg daily.

Finasteride of 1mg daily is clinically proven to reduce the level of dihydrotestosterone by about 70%, while the level of total testosterone remains that same and sometimes even slightly increased. Constant use of Finasteride will help save hair, but the best effect is with younger patients whose hair is just beginning to fall out. The first effect of the medication is noticed after a one-year duration of use. After the first six months, it is possible to notice a temporary increase in hair loss. This happens because new hair is replacing old thin hair. The effect of the drug is active as long as the medication is in use, and with the cessation of therapy hair returns to its original state. Finasteride is not suitable as a therapy against female hair loss. Side effects of this medication are rare and not permanent. A small percent of men (2%) face certain sexual dysfunctions (decreased libido, erectile dysfunction). Enlarged breast tissue may also appear (gynecomastia), as well as reactions such as itching, scratching, stinging, and swelling of the lips and face.

Combining Minoxidil and Finasteride is possible and there are no negative interactions between these two medications. They act under two separate mechanisms – Finasteride blocks negative effects of DHT, while Minoxidilstimulates follicular hair directly. A combination of these two medicines is better then single therapy. 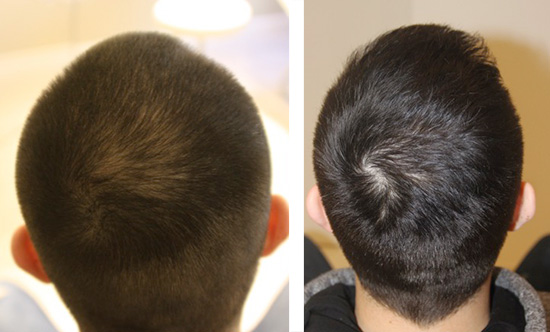