FUE hair transplantation technique involves individual extraction of grafts using microsurgical instrument that makes small circular incisions around each graft 1-2 mm in depth, just as much as needed so the entire follicular unit can be pulled intact with its root. These follicular units may contain one, two, three or more hair which is individual for each patient. The best results are achieved when one extracted intact follicular unit is implanted without further division because statistically divided units have lower survival rate. In certain procedures such as eyebrow transplants, sometimes it is necessary to divide these large grafts containing three or four hairs to those containing one or two to make a brow look as natural as possible. This procedure requires additional skills since grafts can be damaged with the process of cutting. 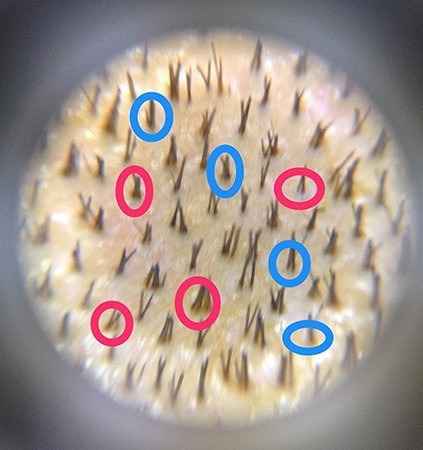 Basics of FUE procedure were set in 2002. by two American doctors – Dr. Robert Bernstein and Dr. William Rassman who have published their work and basic idea of this type of hair transplant. Since then, the technique has been improved as well as the tools for this procedure. The first instrument that was used was manual punch, and some doctors still continued to use it. This instrument  looks like a writing pen and the surgeon must manually rotate it around each graft to allow its extraction. This was a successful, but certainly not as effective way of the extraction beacusee it used to last  for several hours. Also, surgeons would eventually develop various issues in the hand due to the long, repetitive movements. Finally, the trauma of donor region is bigger, and therefore healing is somewhat slower, pain and general discomfort of the patient is greater.

In order to expedite the process with the manual punches, it eventually moved to an automated device and now on the market there are several, both European and American market. Instead of manually turning microsurgical punch, device performs it automatic and doctors work much easier and faster. Extraction of the grafts is very simple, trauma of the tissue is minimal, and the procedure is more comfortable for the patient. French company Medicamat went one step further and in 2008. launched the FUE hair transplantation device called Omnigraft, in the US market known as NeoGraft. Neograft speeds up a bit the whole process of extraction because it automatically extracts grafts after their liberation from the surrounding with the use of vacuum. Grafts are collected in a canister, which is important to regularly empty to avoid their drying. The rest of intervention is almost the same as every other FUE technique. The biggest advantage of the device is better efficiency (simultaneous liberation and graft pull) and fewer number of assistants necessary for this intervention. 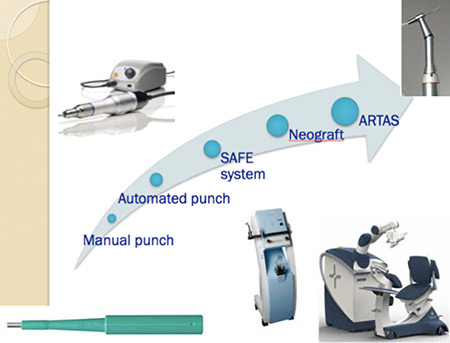 In addition to NeoGraft, newer machine that just a few years ago came on the market is called Artas and represents the first attempt to make the robot into action instead of the surgeon. For now, only a few doctors in the world use this instrument and still there not enough medical studies to present results of this device. One step further is made by Dr. Carlos Wesley, who is working on a device called Piloscope that enables endoscopical extraction of the grafts.

Like every as every other area of medicine, hair transplantation is getting technological support. The best tool for a certain procedure is the one with which the surgeon feels most comfortable.