Scarring alopecia, also known as cicatricial, is a scalp condition in which there is a destruction of the hair follicles, which are replaced with scar tissue. The scars resulting from severe injuries, infections, burns, radiodermatitis, chemical injuries or after certain surgical procedures (facelift, brow lift, neurosurgery, surgery of skin tumors) are of a different origin (etiology) than scarring alopecia. In scarring alopecias, although the cause is unknown, it is believed that the autoimmune process against the hair follicles and sebaceous glands disables growth of hair. It is not contagious nor hereditary and occurs in healthy individuals of all ages. In most cases, there are the small fields that can gradually increase over time, with or without symptoms such as redness, burning, scaling, severe itching and even pain. If the process is active, the greater chance for the presence of these symptoms because of inflammation. Diagnosis is made by taking a detailed medical history with emphasis on patient’s hair loss and accompanying symptoms, then drematoscopy that can determine whether there is an active process and finally biopsy. Treatment should begin as soon as possible to relieve  the discomfort and prevent further hair loss.

Based on the type of inflammatory cell that predominates, there are three groups of scarring alopecia: 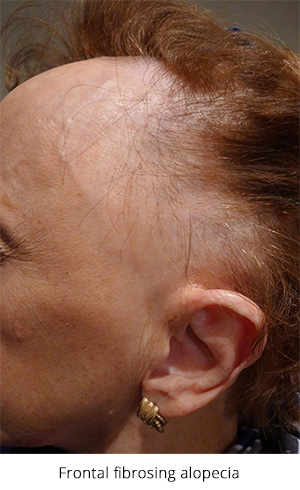 Frontal fibrosing alopecia (FFA) is a form of lymphocytic cicatricial alopecia and is described as mainly permanent hair loss and the formation of scar tissue in the frontal region of the, usually manifested in women who have entered the postmenopausal period (over 50 years). It is characterized by symmetrical hair loss in the frontal area of ​​the head, followed by thinning and loss of eyebrows and eyelashes. The skin looks normal and faded. Although the cause is unknown, it is believed to be associated with immune response and hormone component (menopause) of the pathophysiology of this condition. Diagnosis is based on clinical picture and typical hair loss. It is important to distinguish frontal fibrosing alopecia from traction alopecia, which has completely different etiology where there is hair loss in the same region due to strong traction (tension) of hair due to many years of wearing ponytail, bun or similar hair styles. It is compulsory to do dermoscopy, and sometimes a biopsy, if there is a dilemma. There is still no effective therapy. The most commonly used are corticosteroids (topical, intradermal or oral). If the inflammation is present, it is necessary to administer antibiotics. Inhibitors of 5-alpha reductase such as finasteride, have been well proven, to prevent further loss of hair. In the 2009’s anti-diabetic drug pioglitazone study therapy (off-label) was done, whose efficiency varies, however, one study showed that in 3 of 4 patients reduced the symptoms, inflammation and disease progression. Excimer laser plays an important role in the treatment of this disease. Hair transplantation can be done two years after hair loss has been stable. 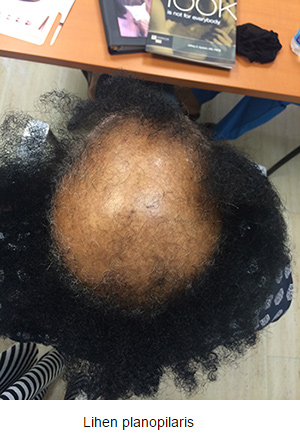 Lichen planopilaris is a rare inflammatory condition that causes uneven permanent hair loss and is more common in women between 40 and 60 years. It is a part of the clinical picture of Lichen planus, and may include skin, mucous membranes and nails. The cause is unknown, but the connection was observed with allergic reactions to certain chemicals, viral infection, medication, and even stressful event. Typically a smooth area without hair on whose edges may be present redness. It occurs in several places and these fields can be combined, creating larger regions of irregular shape, mainly in the region of the vertex. Symptoms are often absent, but itching, pain, tingling and feeling of hardness may be present. Is more common in African populations and in 8% of cases can occur after a hair transplant. Diagnosis is made by clinical examination, dermoscopy and biopsy. The therapy should be started as soon as possible because the process is progressive and should be restricted. It is recommended that the combined use of finasteride, minoxidil (2-5%), and corticosteroids for slowing the progression of the disease, after which, if the disease is stable for two years, can be done hair transplantation. Treatment of blood plasma (PRP) can improve symptoms.

For more information about scarring alopecia, contact us: [email protected]